A few people follow my tweets through the RSS feed provided by Twitter (or through RSS–>email), but Twitter won’t let me choose whether I want @replies to show up in the feed. I don’t want them there, and neither do my followers (especially when they don’t know the people I’m messaging). (This is the same issue that prompted me to modify the Twitter Tools WordPress plugin.)

Fortunately, these niggles can be taken care of rather painlessly by routing the feed through Yahoo! Pipes; the image below shows the source of the pipe I use to do just that. 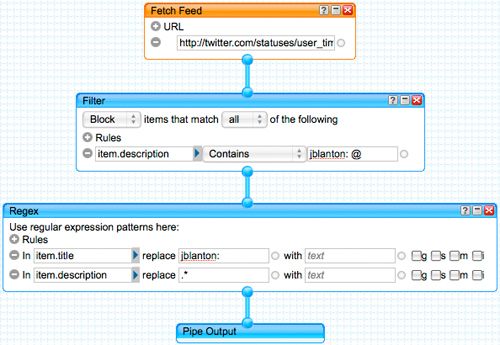 The filter operator searches for, and removes, all items whose description element contains username: @ (i.e., the structure of every @reply given the username preamble).

The regex operator does a couple of things. First, it removes username: from every title, and so only the tweet remains. Second, it removes the description element from every item; . matches any non-newline character, and * matches zero or more copies of the preceding character set (in our case, any non-newline character). Because the regex operator acts on the entire element, including the element’s type, .* wipes out the entire line.