Last week I posted a shot of my new desk to Twitter and quite a few people wrote me asking about various things in the shot (e.g., mouse, keyboard, chair, speakers, etc.), but nothing was asked about more than the Twelve South BookArc, and so I thought I’d discuss it briefly here.

For those that don’t know, the BookArc is a vertical laptop stand, designed with Macs in mind (and I’ve previously mentioned it here on this site). There are many obvious benefits to keeping your notebook vertical, including better heat dissipation, smaller desktop footprint, and, in my opinion, superior looks.

Regarding the BookArc specifically, let me start by saying that it is very well made, feels as solid as a rock and is heavy(!), which attributes are exactly those you want ascribed to the thing that is cradling your aluminum baby. The rubber feet are fastened appropriately and stick well to my desk.

The silicon rubber inserts on which the the laptop rests (it comes with three of varying widths) are as soft as any rubber I’ve ever felt; the feeling really is quite amazing, and leaves you with zero worries about whether the setup will harm your gear. Unfortunately, the rubber inserts are at the heart of my only real complaint with the BookArc, namely that the gap in which the laptop sits is just too wide.

While my laptop rests perfectly vertical (because, I guess, my desk/floor are relatively parallel to the ground), it takes little force to cause the notebook to fall to either side and rest at an angle (~8-10 degrees of vertical). Though there’s no chance of the laptop actually tipping over from its weight alone, or even with a decent amount of external force (it seems to need ~25 degrees of tilt before it’s even a possibility), it would be nice if it would more assuredly stay vertical.

If I were Twelve South, I probably would offer extra inserts for people like me who prefer a tighter fit; like I said, the rubber is so soft that I don’t think I would mind it rubbing against my laptop during daily installation and removal. Also, and as mentioned above, the unit is quite heavy, and so even with a tighter fit it still should be possible to pull the machine out of the stand without the stand coming up with it.

Overall, it’s a thoughtful, great-looking product that leaves you feeling confident in its ability to support your precious, but you may find that the fit is just a bit too loose for your liking.

Finally, a quick note about using vertical stands with the 24 Apple LED Cinema Display. As you may know, this latest Apple display connects to (the latest) Apple laptops via a Mini DisplayPort, a tiny interface similar in size/shape to that of Mini-USB. The display couples the Mini DisplayPort cable to both a MagSafe power connector and a USB cable (so the monitor can receive USB devices), and so you’re left with one very convenient, but heavy cable. (This one cable splits into three smaller cables — power, display and USB — about a foot from the end.) The upside is that (with the latest laptops) the omni-cable acts almost like a dock of sorts, allowing you to set the laptop down and link it up to the rest of your system with minimal effort and hassle. The downside is that when you rest your notebook in the vertical position, back end down, all of the weight of the heavy cable is put on the Mini DisplayPort because that port is above USB and power.

If you’re like me, this, uhh, doesn’t sit well with you and immediately you start thinking of possible solutions. One option may be to tie the USB and power cables to the display cable (at the appropriate points) such that each is forced to support an equal amount of weight. Even better would be to figure out a way to put all of the cable weight on the power connector, which definitely could handle the load. Another option might be to simply keep the cable on your desk (instead of having it hang off the back of it) so as to minimize the strain on the display port.

I’m still trying to figure out the best way to fix this problem, and in the interim am losing sleep thinking about it. 🙂

UPDATE: Soon after I wrote this post, the perfect solution came to me: route the omni-cable under and through the back end of the BookArc. This obviates the weight-of-the-cable issue (because the cable sits on the desk), and as it turns out, the plastic piece where the three cables come together is just large enough to get caught by the back end of the BookArc, so the cable is always 1) the perfect length, and 2) in the same position. It’s about as close to a dock as you can get with a Mac notebook. 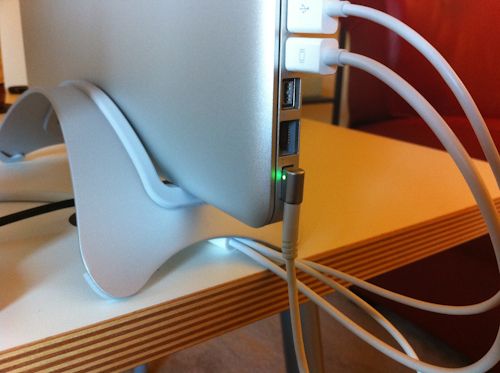