The unite/Balmuda SmartBase (buy) is an absurdly simple iPhone stand, as can be seen from the picture below (and from the others on the product page). It’s a single piece of semi-hard rubber, with a channel underneath for the syncing/charging cable, which channel allows the cable to stay connected to the stand and the stand to remain flat against the table. But for the pics and video I saw beforehand, I probably would have been a little upset to find such a simple piece of kit inside the package. 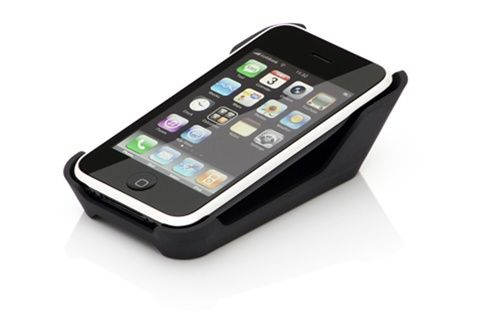 The iPhone fits the stand well, and when within it is tilted at an angle that makes for easy texting, etc., even when the phone is kept near the back of your desk.

My only real criticism is that the base is way too light; it weighs next to nothing. Not only would more weight trick you into thinking that your $18 (it was $24 when I bought mine) went to something other than straight profit, but it also would make the stand a bit more practical.

At its current weight there’s really no way to plug the cable into the phone and then place the phone in the stand with one hand; you have to use your other hand to keep the stand in place because it tends to slide around (or even come off the table a bit) as the attached cable tugs at it. In fact, if you use only enough excess cable as is needed to stow it under the stand when not in use (as shown in the video on the product page), then the tension from the cable (caused by it being bent to plug into the phone) is enough to raise the stand off the desk.

I’d love to say more about the SmartBase, but, well, look at it — it’s a piece a rubber. 😉

(For those wondering, before the SmartBase I was using a Just Mobile Xtand.)